(Adapted from the Club’s “100 Years Celebration” publication and updated)

The Postal Bowling Club was instituted in 1889 to cater for bowlers in the employment of the Post Office, to whom full rights of membership were reserved. A limited number of associate members (non-Post Office employees) were admitted but were prohibited from holding any executive office in the Club. 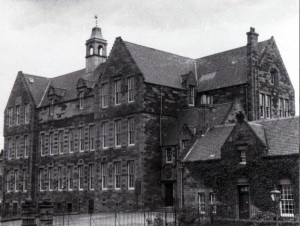 The old Parsons Green Primary School, burnt down and replaced by the current flats overlooking the green

In time, with the spread of the City of Edinburgh and improved transport, the tendency grew for postal employees to seek housing on the city outskirts. As a result, postal recruitment to the club suffered and a greater number of associate members were admitted.

Despite this change in membership, the old constitution was retained until 1944 when it was agreed to alter the rule prohibiting associate members holding the offices of President, Vice President, Secretary and Treasurer. The members were unanimous however, on retaining the original name of the Club in order that it might still attract members from the Post Office and to continue its association and honoured name in the bowling community.

Play in the early days was on the public greens, Montgomery Street being the home venue, but in 1908 the Club took over the present private green from the Parsons Green Bowling Club who had moved to Craigentinny. In 1948 the Club took a major step forward and, under the Presidency of Mr. J.O. Young, the green which originally was the lawn of Parsons Green House was purchased and became the property of the Club. In 1955, plans were completed for the building of a new clubhouse and in the following year the new building was officially opened by the Club’s oldest member, Mr. Alex Gall, an Honorary and Past President of the Club – Mr. W. Edmonstone being President at the time.

It was proposed by the Management Committee at a special meeting in January 1962 that the green be completely lifted, levelled and re-laid for the sum of £675 plus 10s (50p) per square yard for any new turf laid. The members voted against this proposal by 57 votes to 12, the main reason for the rejection being the cost. Further alterations were carried out in 1980 when an automatic watering system was installed thus securing the protection of the green through the peak summer period. The following year a floodlighting system was installed enabling the club to extend the bowling season allowing the last two weeks to be occupied by numerous floodlight competitions and friendly matches. 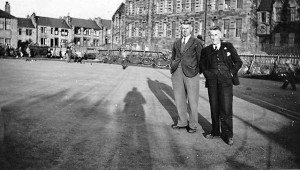 James McNab (right) on the green in front of Parson Green Primary School (before it burnt down).

Various additional developments to the clubhouse have taken place over the years, forming the present-day clubrooms, consisting of gents and ladies locker rooms, kitchen, lounge and main hall with bar. These extended facilities enable the Management Committee to encourage the social side of the club throughout the year.

Club members were very much involved in the aforementioned installations. In fact, since severing its ties with the Post Office, the Club has had many members willing to devote time and effort to the management and upgrading of the Club. However, special mentions are in order for Mr. D.A. Dickson who for 18 years held the office of Secretary and Mr. M. Murray who held the office of Treasurer for 20 years, earning both the respect and admiration of the membership. 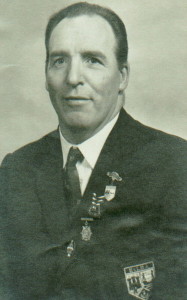 Since its inception, the Club has had its fair share of honours. Early awards were: 1898 Joint League Champions Edinburgh & Leith PBC Association, 1904 Gibson Shield Winners, 1904 League Champions Edinburgh & Leith PBC Association 3rd Division. Other honours have followed through the years and worthy of mention is Walter F Mair who had the honour of representing Scotland in International matches on several occasions; together with John Thomson, David A Dickson, Allan W McInnes and Derek McLean who have all represented Edinburgh & Leith Bowling Association in the Hamilton Trophy. Walter F Mair and Allan W McInnes between them have been club champions on no less than 28 occasions. 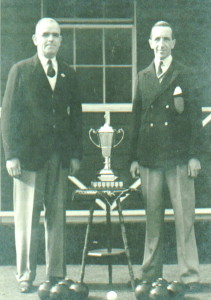 In 1961 the East Edinburgh League was formed with Postal being one of the founder clubs- Abbey and Holyrood, Brunstane, Craigentinny, Hillside, London Road Foundry and Willowbrae being the others. In 1964 Postal had its first president of the East Edinburgh League when D A Dickson accepted nomination. Other presidents have been: 1973 Jas. Anderson, 1981 A W McInnes, in our Centenary Year I Gilroy, Geo. Smith in 1998 & 2009 and Keith Anderson in 2019.

On the 75th Anniversary of the Club, held in the Royal Abbey Hotel on 28th November 1964, the then president, D G Nisbet, intimated that the chief aim of the Club had been to foster a spirit of respect, good-fellowship and sportsmanship, qualities to be endorsed by all members.

Committee members and guests at the 100th Anniversary

A Ladies Day has been held for many years and, due to the enthusiasm shown by them, a Ladies Section was formed in 1965-66 and the support shown by the section over the years justified its formation. The bowling future of the club was secured by the formation of a well-supported Junior Section in 1983.

Since the Centenary Brochure was published in 1989, Postal Bowling Club has continued to have its name engraved on several trophies. In 2001 J Marshall won the Edinburgh Bowling League Singles while in the same year we lifted the Edinburgh Bowling League Fours. Bowls Scotland district competitions have been won on several occasions with the winners going on to represent the Club at the National Finals in Ayr. The Retired Mens Top Ten was won in 2002 and 2014 and in 2003 G Gray won the Edinburgh & Leith Bowling Association Senior Singles and our Senior Fours also lifted the cup. 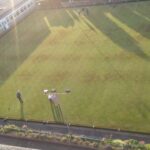 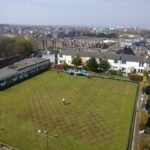 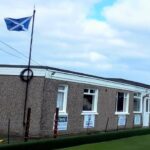